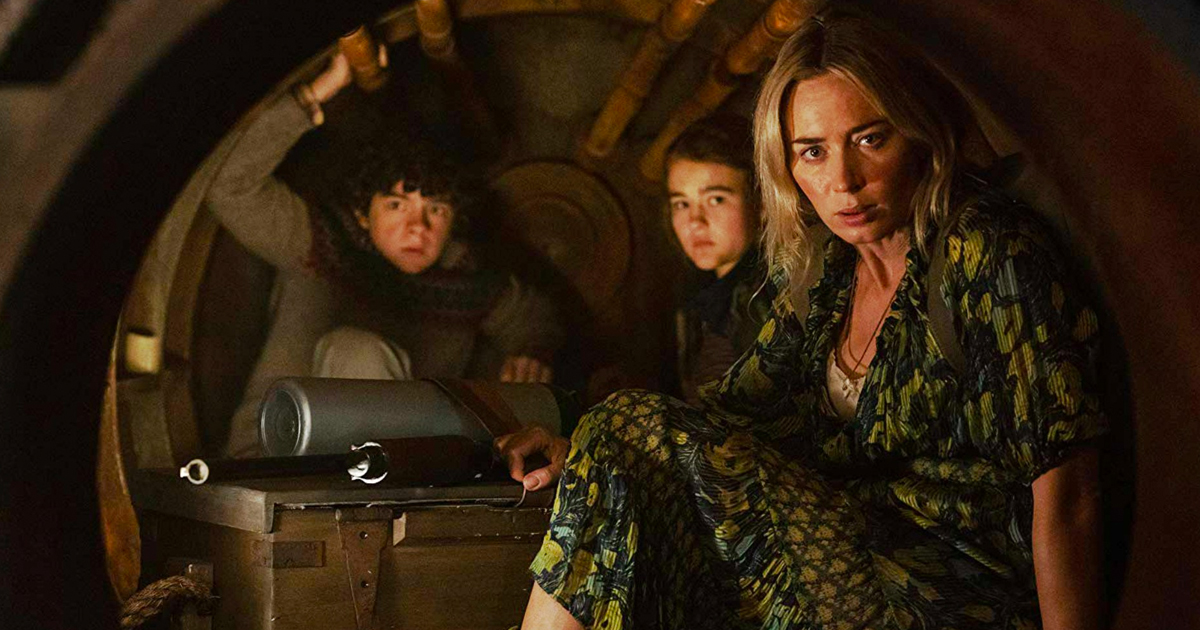 Before I begin my review, I should note that this was my first time in a movie theater in about a year and a half. Having previously attended critic screenings regularly, I found myself in movie theaters quite a bit, though it never lost its luster. Watching a film on the big screen in a darkened theater is never not exciting, but finally being able to so after such a long and difficult year was in itself a great experience. In fact, the last screening I was scheduled to attend before the world shut down was a premiere of A Quiet Place Part II, so this was a bit serendipitous.

I enjoyed the original A Quiet Place, but I don’t believe I liked it quite much as most other people. I thought it was incredibly effective, but I thought it suffered from a lack of world-building. We are immediately thrust into this post-apocalyptic hellscape, but it’s so narrowly focused on the family that we are given only hints of how we got there to begin with. I understand that focusing primarily on the Abbott family brings us much closer to them and their plight (and allows for a significantly smaller budget), but I still felt the film had blinders on, purposely excluding anything outside of the immediate story. That said, it was a very impressive first outing from co-writer and director John Krasinski.

While my expectations were about as high as they were for the first film, I’m happy to say that A Quiet Place Part II has done the unlikely and has improved on the original. John Krasinski has crafted an exciting, tense and engaging thriller that plays out like a cross between The Walking Dead and Jurassic Park, with hints of Stranger Things.

The lack of world-building from the first film is more than addressed in A Quiet Place Part II (thanks to a bigger budget), as the film begins with a flashback to the day that the aliens first attacked Earth. This not only allows for an appearance by John Krasinski’s heroic Lee, but also introduces us to Elliott (Cillian Murphy), a fellow little league father who knows the Abbott family quite well. After an action-packed scene in which their small town is overrun by the now-familiar creatures, we flash forward to the moment immediately after the end of the first film. With Evelyn and her children now forced to survive without Lee, they venture out, newborn in tow, to find help.

Like The Walking Dead, we see small pockets of how civilization has adapted, though it’s still fairly limited in its scope. Cillian Murphy’s Elliot reluctantly helps Evelyn and her children, and like all of Murphy’s work, he elevates each scene he is in. I really liked him and his character here. The always welcome Djimon Hounsou appears in a small role, though I would have liked to see him have a bit more screen time. Emily Blunt, whose screen time is reduced a bit from the first film, does a nice job of conveying a woman who is becoming more and more hardened as a result of this world, particularly now that she must protect her children without the help of her husband.

While we see growth in the development of Evelyn, I was actually a bit disappointed that they didn’t take it a bit further. I’m a sucker for the reluctant hero who transforms into a badass by the end of a film. Linda Hamilton’s Sarah Connor from The Terminator and Bruce Campbell’s Ash Williams from Evil Dead 2 come to mind. The final shot of the original A Quiet Place hinted that we had seen such a transformation, and while definitely we see Blunt as an incredibly strong character dealing with extraordinary circumstances, I feel they pulled her back a bit to allow for slightly slower character development. I suspect should there be a part three (and given how the film ends, I have no reason to believe there won’t be), Evelyn will go full Sarah Connor. The standout in the film is Millicent Simmonds, who returns as the Abbott’s hearing-impaired daughter, Regan. While she was the emotional center of the first film, here she catapults the film’s plot and admirably carries much of it on her shoulders. Noah Jupe also returns as Marcus Abbott, though he is visibly older than he was in the original film. This requires a bit of a suspension of disbelief, considering the story not only picks up exactly where it left off, but also because the opening flashback takes place about a year and a half earlier. Marcus too has a slightly diminished role, but he is given a few scenes to really sink his teeth into.

A Quiet Place will undoubtedly be a franchise for Paramount, as well it should be. Blunt has stated that husband Krasinski has an idea for a third film, and the studio has reportedly hired Loving screenwriter Jeff Nichols to pen a spinoff with Krasinski producing (I suspect we will be seeing Blunt return only one more time, and that Krasinski’s role in the franchise will also begin to diminish over time). The premise alone (be quiet or be killed) has such an incredible built-in tension device that it opens up a world of possibilities for expanding the universe they’ve created. I’ve said this before in my reviews, but I often find myself judging a film by measuring how much more time I would like to spend with the characters once it’s over. That said, I eagerly await A Quiet Place Part III.