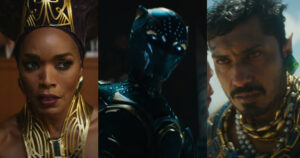 Disney has released the full trailer to their highly anticipated  Black Panther: Wakanda Forever, and it gives us a look at the new Black Panther and a flying Namor.